The Pros and Cons of Apple Music: Is It Worth Your Money?

Apple Music is a subscription-based music streaming service developed by Apple Inc. And as streaming music grew to become the primary way people listen and pay for music today, Apple Music ramped up with the second most subscribers next to Spotify. Although many people choose to subscribe to Apple Music, 9.99 dollars per month might not seem like much, and it adds up for a year. 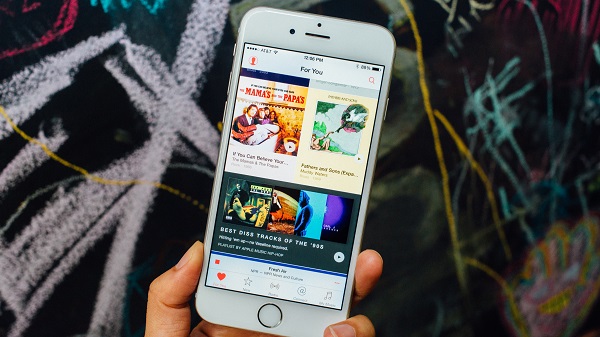 Selection of songs: When it comes to music streaming services, the collection of songs available is one of the most important things. In this department, Apple did an excellent job. There are over 40 million songs. So, no matter what your favorite genre is, you will find plenty of songs to listen to. Old and new, fast or slow, just name it! Another thing to mention. You can find exclusives. Some albums have their debut right on this music streaming service before landing on others.

Features: Apple Music is packed with features, including offline listening for when you're not connected, and it combines all your music in one place - even songs ripped from a CD. Apple Music also offers up radio stations, social ties, and integration with Siri - so you can control most things with voice commands. Besides, you can shuffle the songs you have in your library, share your playlists with family and friends, and more. Apple Music is available on the devices not just iOS, including Android phones and tablets and Sonos. If you are using an Android device, just head to the Play Store and download the Apple Music app.

Free Trial: One of the great things about Apple Music is that first-time users get 3 months of the free trial. All you need to do is download the app for your device, enter your Apple ID (you can create one here if you don't have it already), choose the membership plan and provide the credit card details. You won't be charged during the free trial period. A three-month free trial will give you plenty of time to decide whether you like Apple Music and how it compares to other services. 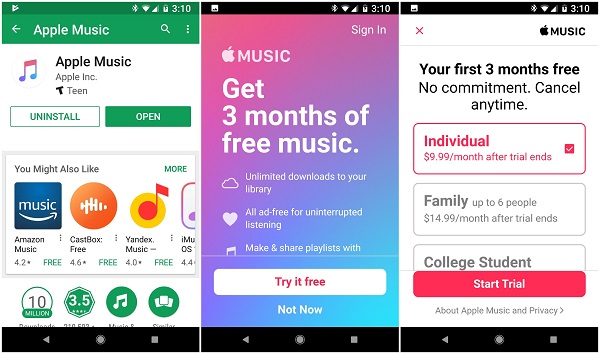 Overly-complicated User Interface: Apple Music's options can sometimes be confusing, making it hard to get around. Every tab feels like it's busting at the seams with too many menus, submenus, and content. The differences between the For You, New and Radio tabs aren't immediately visible, because they all look similar. Within those tabs, there's not much organization, with playlists, albums, videos, and other groupings thrown together in no discernible order. Even the search tool is complicated, with separate tabs for Apple Music (the streaming tracks) and My Music (tracks you've purchased).

Usage Limitation: On one hand, Apple Music is not available in all countries or regions. On the other hand, you are only allowed to access Apple Music on iOS, Apple Watch, Macs, PCs, and Android devices. The entire music collections are streaming, not buying, you download files are cached ones, which limit you to use those files. It is not available on platforms and Roku, Amazon Fire devices, a range of speakers and stereos, and PlayStation 3 and 4. When you cancel your subscription, any streaming music you've added to your library from the Apple Music catalog will no longer be playable.

The above article carried on a brief discussion on the advantages and disadvantages of Apple Music. Apart from Apple Music, other streaming services like Spotify or Google Play Music also have pros and cons. Which streaming music service is right for you? It would be best if you made your decision combined with yourself conditions.

How to Get and Enjoy Apple Music Freely

With Apple Music Converter, you can convert Apple Music to MP3, AAC, AIFF, FLAC or WAV with the original sound kept. You can do this in few easy steps.

Click "Settings" button or gear icon at the upper right of the program, you can choose output format as MP3, AAC, AIFF, FLAC or WAV. Besides, you can set the output path and output audio quality to the highest 256 kbps.

Choose a playlist, artist, or album and open it, then click the "Add" button at the bottom right corner. You will see a pop-up dialog that will display all the songs that you can convert. Just select the songs you want to convert.

Click "Convert " button, the program will start to convert Apple Music songs automatically. Few minutes later, you can get the Apple Music files from the history option.