Two Solutions to Get Apple Music on Apple TV

We can learn from the Apple website: If you subscribe to Apple Music, you can download songs, albums, and playlists for offline listening on Apple TV with the Music app. But it requires Apple TV (4th generation) or later. That's to say, Apple Music is not supported on the 3rd Generation Apple TV or earlier.

Apple's latest Apple TV offers the Music app. With Music app, you can not only listen to all your own music collection through iCloud Music Library in the My Music section, but also access all the tracks made available through that service, including radio stations.

1 Open the Music app on Apple TV. Once you've subscribed to Apple Music, you need to log into your Apple TV using the same Apple ID as used for your Apple Music account in Settings > Accounts.

2 You can then enable the service on your Apple TV in Settings > Apps > Music, where you should turn on iCloud Music Library in order to access all your own music on the system. 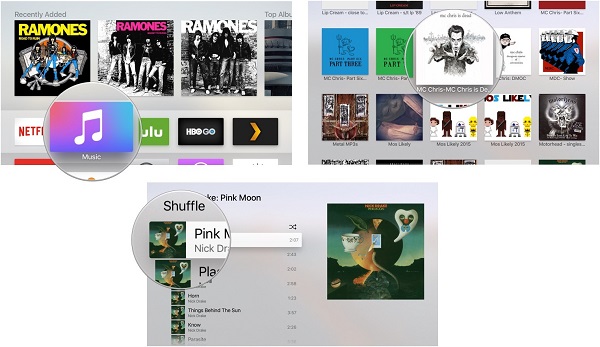 3 Now you can find an artist, song, or album to play.

If you have an older Apple TV model, and you will find there is no Music app on it. If you want to play Apple Music files on this kind of Apple TV, what should you do? You can stream music collections held on other Apple devices around your home using the Home Sharing feature. Still, if you want to listen to Apple Music tracks, you need to stream them to your TV from a compatible device, such as an iPhone, iPad, or Mac using AirPlay.

Simple Tutorial: How to Convert Apple Music for Playback on Apple TV

Now you can download the latest version of Apple Music Converter and follow the detailed guide below to learn the Apple Music to Apple TV conversion process. The program is compatible with Mac and Windows platforms. Here we will illustrate how it works with the Windows version.

Launch Apple Music Converter on your computer and follow the indication to open Apple Music web player and sign in with Apple ID.

Click the Settings gear icon on the top right of the user interface, you can set MP3, AAC, AIFF, WAV or FLAC as output format.

Choose a playlist, artist, or album and open it. Then, click on the Add button and you will see a pop-up windows that shows music for conversion. You can convert all of them or select the music by yourself.

Click the Convert button, the program will start to convert Apple Music automatically. After conversion, you can locate the Apple Music files in the history folder.