Both Apple Music and iTunes Match can put your iTunes in the Cloud, and make use of iCloud Music Library in subtly different ways. Each of them offers specific features and limitations, and they can even be used simultaneously.

Apple Music costs $9.99 per month (you can try it free for three months). There's a family plan for $14.99/ month providing service for up to six family members. All you need to do is set up iCloud Family Sharing on your iOS device or Mac and invite family members to join the group. (Android users can be part of your family membership, too.)

iTunes Match is a $24-per-year service that stores all your music in iCloud—even songs imported from CDs or not purchased in the iTunes Store—and make it available on up to 10 of your devices and computers.

Apple Music lets you have a free trial for three months. After subscribing to Apple Music membership, you can play any track in Apple Music if you have a data connection. You can download any music from Apple Music and listen to it offline.

Besides, you also gain access to Beats 1 radio station and a limited selection of TV and Films, which are music-related videos and a few programmers Apple has made. Please note that after you unsubscribe` from Apple Music, the downloaded tracks before will no longer be available. 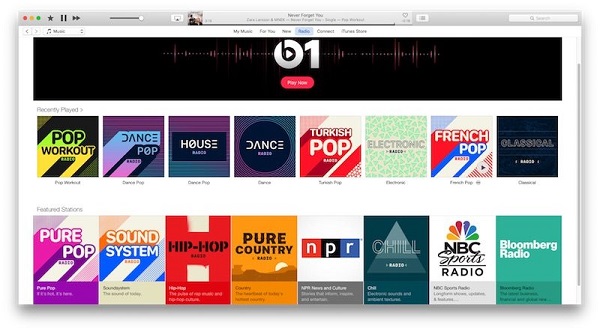 To use iTunes Match, you sign up for the service using your Apple ID and enable it on all the computers and devices on which you want to use it. If you subscribe to iTunes Match, you can access all your musical content via the Cloud. It will store all music, including the tracks you have imported from CDs and purchased elsewhere, in your computer's iTunes library up to Apple's servers and accessible to any of your iOS devices or computers running iTunes.

The most significant difference between Apple Music and iTunes Match is that Apple Music can't own the music they downloaded through the service because of DRM (digital rights management) protection. Songs from Apple Music can only be accessed while you have an active subscription. When you cancel your subscription, the music goes away.

With iTunes Match, songs added are made available to your other computers or devices in 256 Kbps AAC. Thus, any of the songs that you save offline are available to play, even if you cancel your subscription, you can still keep all the music you had before signing up.

Extra Tips: Is It Possible to Convert Apple Music to MP3

Apple Music Converter is a professional Apple Music conversion software. It is specially designed for you to convert Apple Music songs to MP3, AAC, AIFF, FLAC or WAV without loss in audio quality.

Download, install and launch the latest version of Apple Music Converter on your computer. Then, please sign in with your Apple ID to access to Apple Music.

Apple Music originally comes with M4P format encoded in 256kbps. With Apple Music Converter, you can choose MP3, AAC, AIFF, FLAC and WAV as output format by clicking the Settings button or gear icon at the upper right of the program. Besides, you can set the output audio quality to the highest 256 kbps.

Choose a playlist, artist, or album and open it. Then, you can click the Add button to select tracks from the pop-up window for conversion.

Click the Convert button, the program will start to convert Apple Music songs. Few minutes later, you can get the free Apple Music files from the history option.

How to Stream Apple Music to Roku