How to Play Apple Music on Samsung Galaxy Tab S4

'Q: Apple Music on Android Tablet. I'm going to buy a tablet on android but I want to be sure I'll be able to use apple music on it. For Samsung Galaxy Tab S4 (android 8.1) specifically.'

Many Apple Music subscribers may have the similar problems when they want to stream Apple Music songs to Android Tablet like Samsung Galaxy Tab S4. Actually, Apple Music app is also available for Android devices. Unfortunately, the Apple Music app on Android may keep crashing. But you don't have to worry because we have already found out an once-and-for-all solution here to the tricky problem for you.

Samsung Galaxy Tab S4 tablet was launched in August 2018, which has WiFi version and LTE edition. It is a new flagship 10.5-inch tablet that Samsung is aiming toward people who want a device that's lighter than an ultrabook but still has a keyboard and pen. If you want a high-end Android tablet then the Tab S4 is the device to get: a fast processor, a gorgeous HDR OLED and the S-Pen included.

The Galaxy Tab S4 runs Android 8.1. It is powered by 2.35GHz octa-core processor and it comes with 4GB of RAM. The tablet packs 64GB of internal storage that can be expanded up to 2000GB via a microSD card. 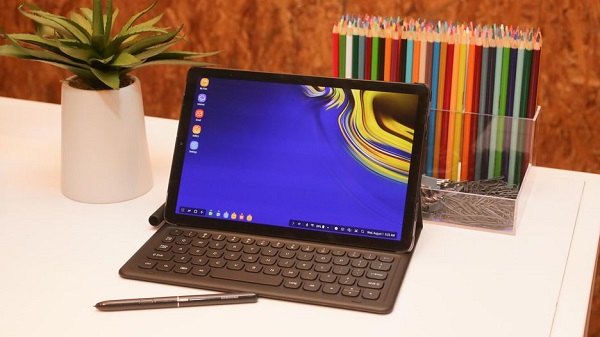 To stream Apple Music songs to Samsung Galaxy Tab S4, you need to convert Apple Music songs firstly. There are a variety of similar third-party Apple Music conversion tools for you. Apple Music Converter stands out among them because this program includes easy operation, complete functions, and a convenience user interface.

Click setting button at the upper right cornor of the program, you can select MP3, AAC, AIFF, WAV and FLAC as output format. Besides, you can also set Output Quality up to 256 Kbps and Output Folder based on your requirement.

To add Apple Music tracks to the program, you just need to open a playlist, artist, or album and click on the Add button. Then, you will see a pop-up dialog that shows the songs you can convert.

Once all settings are done, you can click Convert button to start Apple Music to MP3 conversion process. When the conversion is finished, you will find the converted Apple Music files in History option.

Connect your Galaxy Tab S4 to your computer with a USB cable. Please select Tap for other USB options that allows you to transfer media files. Locate your folders and double click on Music (If you do not have a Music folder, you can add one). Now you can drag and drop the Apple Music files into the Music folder to add them to your Tab S4. Now you can play Apple Music on Samsung Galaxy Tab S4 without any limits.

How to Play Apple Music on Xbox One