How to Play Spotify on Apple Watch without Phone

'Will I be able to stream music from Spotify Apple Watch app without being connected to my phone?' 'Can you listen to Spotify on Apple Watch?'

Apple Watch is one of the best smart watches developed by Apple Inc., Apple Watch Series 4 is the newest one. With several apps on Watch, you can see your ETA, access your voice recorder, see sports scores, measure your activity and even unlock your car. The Apple Watch is also a powerful health tool. It gives you all sorts of feedback for any exercise you do throughout the day, and it's always easy to see if you're meeting your daily fitness goals. The Apple Watch does a lot of things that make life easier.

Apple Watch is very suitable for people like outdoor sports. Listening to some music is an absolute dream when you're exercising. As the most popular music service, Spotify might be the music service of choice for many sports enthusiasts. In this post, we will share with you two approaches to enjoy Spotify Music on Apple Watch easily and effectively.

Spotify is available as a free download on the App Store. So Spotify users are able to use an Apple Watch Spotify app to play Spotify tracks from the wrist. You'll need to have an iPhone or later running iOS 10 and above, as well as an Apple Watch with watchOS 4 and above. These steps will work for both free and premium Spotify users. Let's begin.

1.Launch the Apple Watch app on your smartphone.

2.In the My Watch tab, under the heading Installed on Apple Watch, check that Spotify appears in the list. If it isn't, scroll down to the section titled Available Apps and tap the INSTALL button next to Spotify. 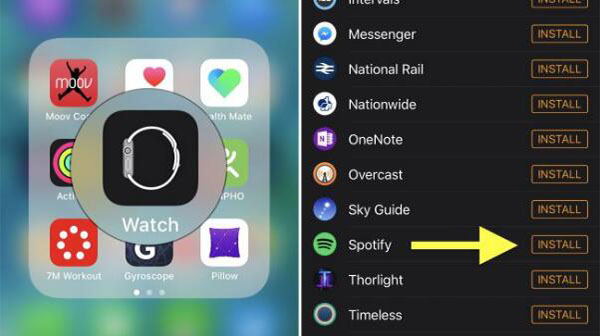 3.After it's installed, select the Spotify app from your Apple Watch's Home screen. Alternately, open the Spotify app on your iPhone and it should automatically launch on your wrist.

4.On Apple Watch, the main screen of the Spotify app provides you with regular playback functions: you can pause, skip forward and back the music playing from the Apple Watch itself. You can use the Digital Crown or your finger to scroll through this list, and tap a playlist or album to play it. 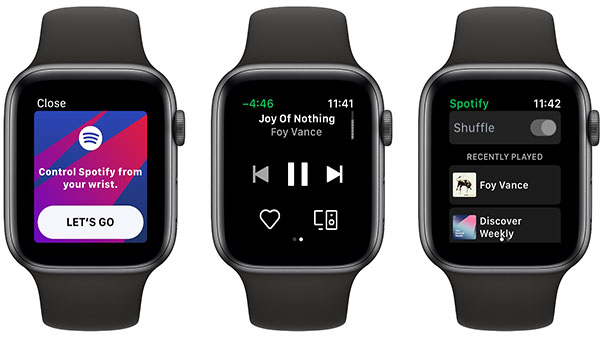 Spotify's Apple Watch has its limitations: It is just a controller for your iPhone, meaning you can not play the music from the Watch, but on your iPhone. Furthermore, you can't use the Apple Watch app to select individual songs to play, but choose recent items. Another major oversight is the inability to store music on your Apple Watch and listen offline.

Don't worry, here we will come up with an alternative way to help you. With large capacity storage, you can sync and play tracks to Apple Watch. However, when putting Spotify music on the Apple Watch, you may encountered something of an issue: we couldn't get anything from Spotify. That's because Spotify music are encoded in OGG Vorbis format which is not supported by Apple Watch.

How to Convert Spotify Music to Apple Watch

Before we started, make sure you have installed the latest version of Spotify Music Converter. It is compatible with both Windows and Mac systems. What's more, it works for free and Spotify Premium users, you don't have to install Spotify application on your computer, all you need to have the Spotify account signed in. Follow the steps below to learn how to convert Spotify Music to Apple Watch for offline playing.

button on the upper right-hand corner of the interface, you will see the Settings window pop-up. Then you can choose MP3, AAC, AIFF, WAV and FLAC as the output format.

Simply click Convert button to start converting Spotify Music. Once the conversion completed, you can find the converted Spotify songs in the history folder.

At first, transfer the converted Spotify music to your iPhone. Next launch the Watch app, tap on Music >> Synced Playlist, select the converted Spotify songs you want to sync. Finally, music does not instantly sync to the Apple Watch — the device must be placed on its charger to begin the transfer process, ensuring the battery is not drained from moving files.

Remove your Apple Watch until the progress bar completes at the top of your iPhone's screen. Now you can play Spotify Music on Apple Watch using a pair of connected Bluetooth headphones, like Apple's AirPods, without having your iPhone nearby.

How to Convert Spotify Songs to WAV