Disney+ is a relatively new streaming service from Disney that offers tons of great content, including movies, TV shows, and original programming. If you're a fan of Disney or want to check out what all the fuss is about, you'll want to know how to download Disney+ videos in MP4 format. In this article, we'll show you how to do just that!

It's tempting to think that we can just download any movie or TV show that we want from streaming platforms like Disney+, and this is actually the case. Simply subscribe to the service, you can easily download your favorite titles with its app and enjoy them offline during the subscription period. However, there is an important point that you need to pay attention to, that is all Disney+ downloads are time-limited and device-limited. That means, you can only watch Disney+ downloads on its own app and will lose access to them once your subscription ends.

Under such cases, it is best to download your favorite Disney movies in MP4 format to keep them forever as well as enjoy them anytime. Then, how can we do that? Read on, there is a wonderful tool that can help you make it available.

All you need is TunePat Disney+ Video Downloader - an excellent video downloader for Disney+ users. Disney+ members can use this tool to download videos from the streaming service to their devices for offline viewing. This tool provides multilingual audio tracks and subtitles as well as high-definition downloads (up to 720p). The user-friendly interface makes it simple for even novice technology users to navigate. In addition to downloading in high definition (up to 720p), it keeps multilingual audio tracks and subtitles. All downloads will be saved as .mp4 or .mkv files. This tool is the ideal solution for anyone looking to enjoy Disney content on the go. Here are the steps to download videos.

Launch Disney+ Video Downloader, and enter any word into the search box, and the login window of Disney Plus will be displayed. Simply follow the instructions to enter your account info. It is used for accessing the Disney+ library. 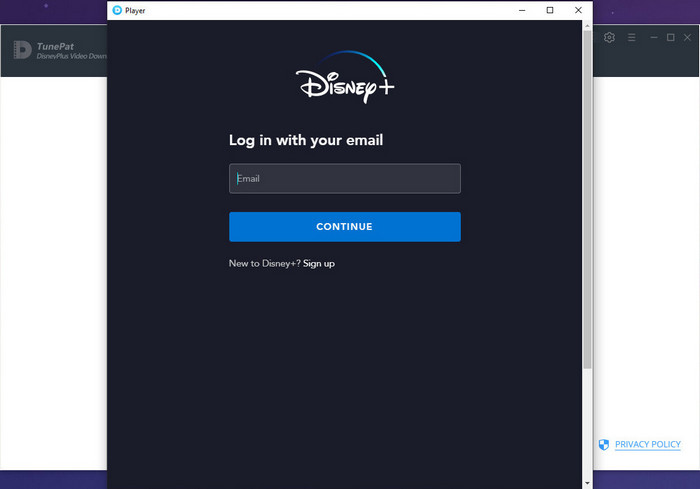 Navigate to Disney Plus official website, copy the video link you want to download, and paste it to the app, it will process and offer you the download option soon. Or you can also add videos by using keywords. 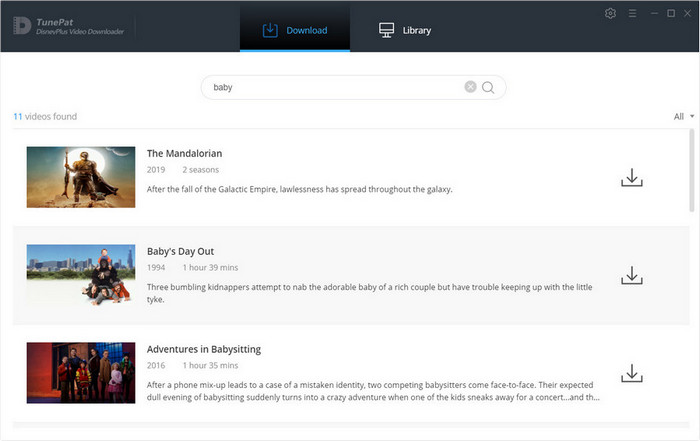 Click the Gear icon on the top right, the general setting window will pop up to allow you to set the output format as MP4, change output quality, select language and set the output path. 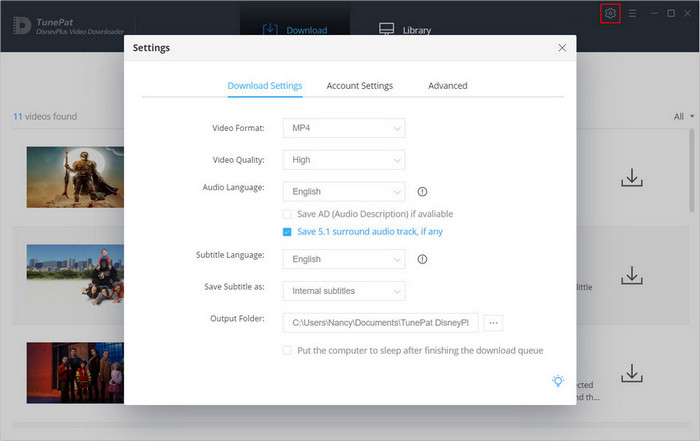 The downloader offers an advanced download option for you to choose specific audio tracks, video qualities, sizes, and subtitles. Suppose you are downloading series, you can open the window by clicking the download icon, then "Advanced Download" to customize the settings. For downloading Disney+ movies, the icon is next to the download button. 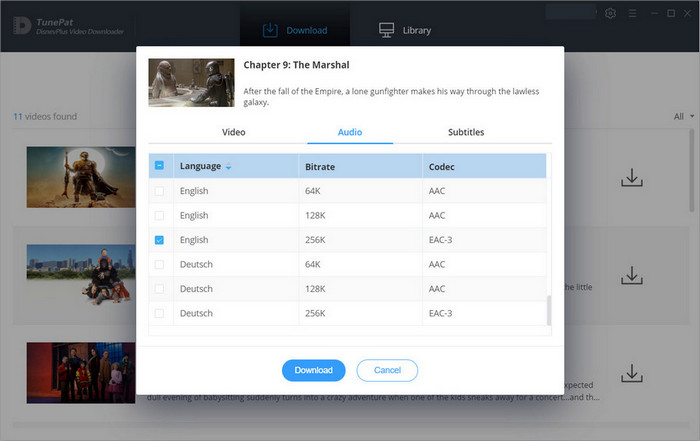 Finally, click the download button to start downloading Disney+ videos in MP4 fomat. After downloading, you can find the files on the output folder and enjoy them offline anywhere anytime. 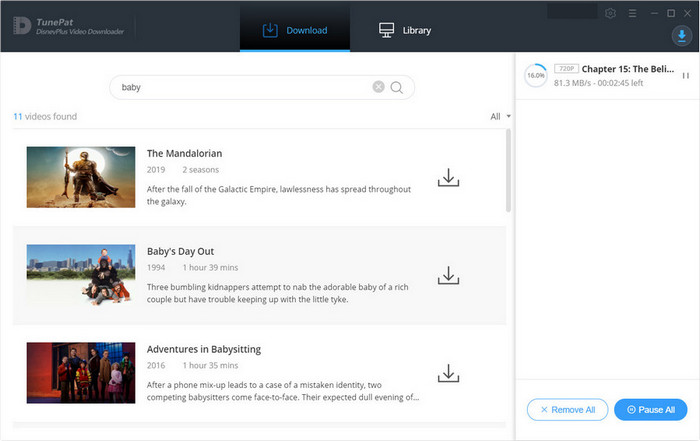 Part 2: Can We Keep Disney+ Downloads Forever and Move to Other Devices

Why not? All the videos downloaded by TunePat Disney+ Video Downloader will be stored in MP4 format which offers high-quality audio and video, while also being compatible with a wide range of devices and streaming platforms. Downloaded files can be watched without an internet connection, saved onto multiple devices, and kept forever.

Part 3: Best 10 Disney+ Movies for Your Enjoying on Holiday

The holiday season is coming. If you are planning to have a trip, here are the best 10 Disney movies for your enjoyment. You can also use TunePat to download them on your devices:

1. Cruella: Set in London during the punk rock movement of the 1970s, the film revolves around Estella Miller, an aspiring fashion designer, as she explores the path that leads her to become a notorious up-and-coming fashion designer known as Cruella de Vil.

2. The Princess Diaries: The Disney+ movie "The Princess Diaries" follows the story of Mia Thermopolis, a high school student who discovers that she is actually the princess of a small European country called Genovia. As she struggles to balance her royal duties with her everyday teenage life, Mia must also come to terms with the fact that her estranged father will soon be stepping down as prince and passing on the crown to her. With the help of her spunky grandmother (the Queen of Genovia), Mia learns what it means to be a princess and ultimately finds the courage to take on the throne.

3. Coco: The Disney+ movie "Coco" takes viewers on a journey to the brightly-colored Land of the Dead. This fantastical world is home to departed family members, who play an important role in guiding young Miguel's destiny. Miguel dreams of becoming a musician, like his idol Ernesto de la Cruz, but his family forbids music due to a generations-old ban. When Miguel accidentally enters the Land of the Dead, he must navigate its navigates its various challenges and seek the truth about his past in order to return to the land of the living. Along the way, he learns about the power of family and reminds those in both worlds about the importance of remembering those who have passed on. 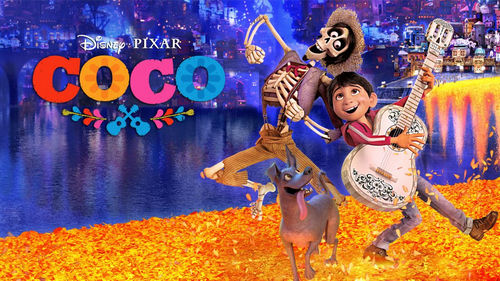 4. Jungle Cruise: "Jungle Cruise" is about a safari park employee who secretly witnesses his boss being murdered by a famous explorer. He must then go on the run with the only witness to the crime, the safari’s lions. The movie will premiere on November 9th, 2019. It is directed by Jon Favreau and stars Dwayne Johnson and Emily Blunt.

5. Iron Man: "Iron Man" is about a robot built by Tony Stark that can fly and shoot lasers. It's one of the first superhero movies, so it's important to know that.

6. Star Wars Episode IV: A New Hope: "A New Hope" is a movie that tells the story of how Luke Skywalker, a young farm boy from Tatooine, becomes a hero in the fight against the evil Galactic Empire. A key part of this movie is that Luke goes against his father's wishes and joins the rebellion against the Empire. This shows that even people who disagree with their parents can become heroes if they have enough passion and courage.

7. Hamilton: "Hamilton" is a biographical hip-hop musical on the life of Alexander Hamilton and his involvement in the American Revolutionary War. "Hamilton" debuted on Broadway in 2015, and was made into a Disney+ series in 2018. The story centers on Hamilton, who rose from poverty to become one of the founding fathers of the United States. Throughout the show, Hamilton struggles with his identity as he tries to live up to his father's legacy and work toward independence from Great Britain.

8. The Avengers: The Avengers is a 2012 American superhero film based on the Marvel Comics superhero team of the same name, produced by Marvel Studios and distributed by Walt Disney Studios Motion Pictures. It is the second installment in the Marvel Cinematic Universe (MCU). The film was directed by Joss Whedon and features an ensemble cast, it is the sixth film in the franchise.

9. The Lion King: The Lion King is a 2019 American musical drama film directed and produced by Jon Favreau, written by Jeff Nathanson, and produced by Walt Disney Pictures and Fairview Entertainment. It is a photorealistic computer-animated remake of Disney's traditionally animated 1994 film of the same name. The plot follows Simba, a young lion who must embrace his role as the rightful king of his homeland following the murder of his father, Mufasa, at the hands of his uncle, Scar. 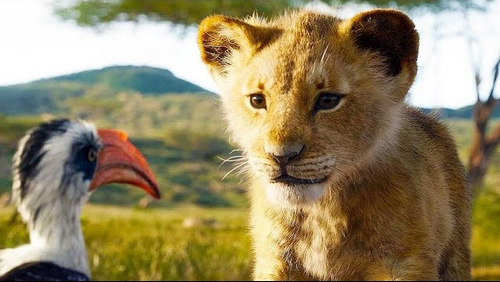 10. Avatar: The Disney+ movie "Avatar" is about an alien who crash lands on Pandora, an area of the Earth that has been cut off from the rest of the planet. The alien finds himself in conflict with humans and must protect Pandora from human threats.

Downloading Disney+ videos to MP4 files is easy with TunePat Disney+ Video Downloader. Just follow the simple steps and you'll have your favorite movies and TV shows in no time. Plus, you can watch them offline or on any device, which is great for long car rides or flights. Thanks for reading and enjoy your new downloads!